I set my alarm for 4:30 a.m. before I fell asleep Sunday night. The alarm woke me and I stumbled to the west facing window in my bedroom and couldn’t find the full moon. I assumed, blearily and incorrectly, that the moon must be hidden by clouds. I crossed over to my library and its east facing window and couldn’t see any stars (not unusual though that near to dawn and with the amount of light pollution I suffer from). I went back to bed.

My regular alarm woke me at 5:00 a.m. sharp like it always does. I checked my windows again, but this time my east facing window showed a mostly blue sky.  That gave me a jolt, almost like a hot cup of coffe.  I immediately began rushing around the house, throwing on clothes and grabbing my camera bag. I jumped in the car and drove to my closest vantage poitn with an adequate western horizon view. I could see the moon, already partially eclipsed, but obscured by some thin clouds and lots of haze.

Clouds obscured the moon (click on image for rest of album)

I wondered to myself why the moon seemed to be setting in the southwest. I stood in the same spot from where I watched and photographed the solar eclipse just two weeks before and at that time, both the moon and the sun set almost due west. I did spend some time today trying to find an explanation or graph or plot to explain to me visually why the moon’s orbit diverged so greatly over a half month. I’m still searching for a satsifactory answer.

Moon (far left) and camera (far right). Two weeks ago, the moon and sun set to the right of my camera (out of frame).

I settled in to a routine, snapping photos every few seconds or minutes, sometimes adjusting the shutter speed, or the aperture. I occassionally switched back to autonatic mode, letting the camera decide for itself what settings to use (usually producing photos I didn’t care for). By 5:30, the moon had almost set behind the hill to the southwest of my location.

Partial Lunar Eclipse as seen from Lansing, Kansas (click on image for rest of album)

I took a total of sixty photos, not including the one above taken with my call phone, so if you are a true glutton for punishment, click on the photos above to review the entire album.  I didn’t have time this morning before leaving for work to review and filter out the obvious duds.

If I had realized the moon would set so early, I would have driven to a better site where I didn’t have a tall hill between me and the southwestern horizon.  I mistakenly assumed the moon would set in the west and opted to use a location only a few blocks from my home. 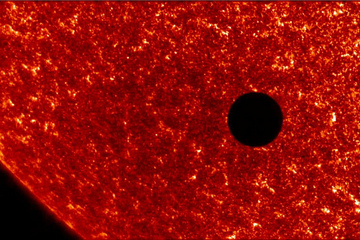 Tomorrow, I will be at the same spot, but at a different time, to observe and photograph the Transit of Venus.  You should be able to see me and my telescope from Main Street in Lansing during rush hour tomorrow afternoon.  Stop by and have a look at a once-in-a-lifetime event.  If you live in the Kansas City metro area, you have multiple locations from which to view the transit (click here for more information thanks to the Astronomincal Society of Kansas City).