Last year, my daughter gave me a puzzle for my birthday.  Last week, in a fit of household reorganizing (aka decluttering), I decided it was high time I cracked open this box to see if I could still climb the puzzle mountain.

Being only 550 pieces, I did not feel daunted at the prospect.  My grandmother and I used to put together three or five thousand piece puzzles during the summer months when I was in grade school.

I pulled the rip-cord-like tab at one end of the box and took out the sealed plastic bag containing the pieces.  I had to get scissors to cut open the bag as it would not yield to my fingers.  I unceremoniously dumped the pieces on one half of our kitchen table.

First things first, I dug piece-by-piece through the pile looking for edge pieces.  Once I had a smaller pile of edge pieces, I moved (shoved) the larger pile of pieces to the middle of the table and began assembling the boundaries of the puzzle.  I needed a space two foot by a foot and a half to assemble the pieces.  I had the edge pieces in place before bedtime that first night, noting that I’d missed two or three of the edge pieces in my first scan through the pile.

The next day I sorted pieces by color, keeping an eye out for the missing edge pieces.  I quickly became overwhelmed by the greenness of most of the pieces.  This didn’t surprise me considering the source. For example, compare the wall color chosen by my daughter for one of her bedrooms: 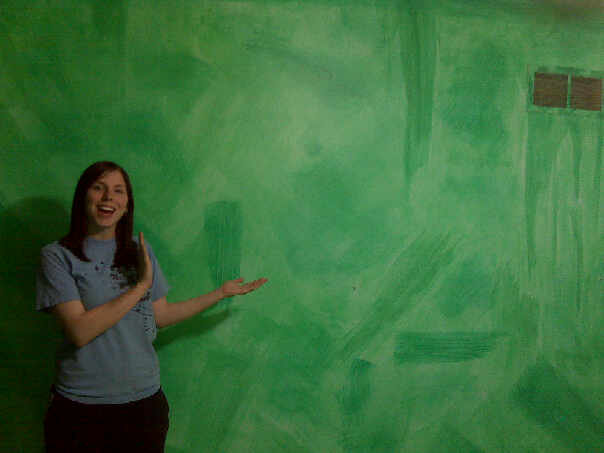 I resigned myself to seeing green (but not being green with envy) for the next several days.  Let me explain.  Green is not my favorite color.  Purple or burgandy or maroon are more to my liking (think wine).  However, as is obvious from the photo above, green is one of my daughter’s favorite colors.  She liked it so much, she moved to Texas to attend and graduate from North Texas University … the home of North Texas Mean Green.

I did eventually find the missing edge pieces and slowly began assembling small sections, either attached to the border or as islands that would become attached at a later time.  Over the next week, I spent 15-30 minutes a day, sometimes both morning and night, placing pieces.  I am grateful the dogs didn’t think the dropped puzzle pieces were dog treats or I’d never been able to complete the puzzle.  It was a near thing though a couple of times with Lexy.  Apollo just snored by my feet under the table, dreaming of the walks we used to take during sunsets each evening.

A couple of days ago, I reached critical puzzle mass.  I’d reached the last fifteen pieces.  I counted them (the open spaces and the pieces to confirm one matched the other) while I took a phone call from my dad to schedule a time to get together this weekend to celebrate a belated father’s day.  After I hung up, I placed those few pieces and took a couple of photos. 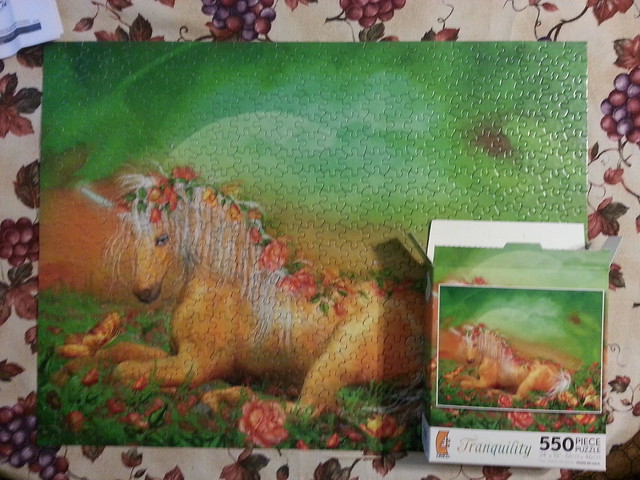 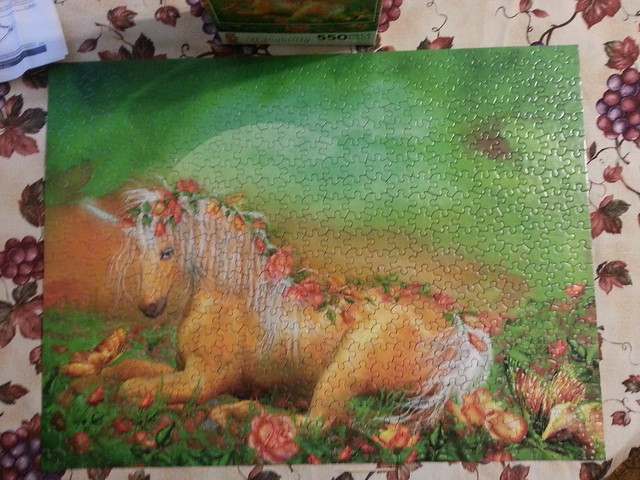 Completed puzzle ‘The Unicorn of the Roses’ by Cavalaris

I could probably buy some puzzle glue and hang this in the bedroom I mentioned above.  But I’ll probably forgo that extra effort and return the pieces, securely nestled in a Ziploc bag, back in the box for another rainy day.  Interestingly, the box gives the name of the artwork used, but not the artist.  A quick Internet search revealed the artist as Carol Cavalaris.

Here’s a link to a poster of “The Unicorn of the Roses” painting used in the puzzle above.