I thought I’d use the European racing term more commonly known in the States as ‘passing’ to refer to the progress Venus has made in the predawn sky this past week.

Saturday morning I woke up way too early for a weekend, but remembered reading something about Venus and Jupiter getting closer together.  Without reminding myself by actually looking the information up via Facebook or Twitter or Google, I threw on some clothes, grabbed the keys to one of the vehicles (didn’t care which one) and rushed outside.  It was still very dark, just after five o’clock (Central time zone).  I drove a block up a slight hill to my favorite eastern horizon viewing site (just to the east of Lansing City Hall) and waited … and waited … and waited.  I finally used my smartphone (which I never leave home without) to check when Venus and Jupiter were supposed to rise (using Astronomy.com’s Tonight’s Sky mobile web page).  Venus rose at 5:00 Saturday morning (8/17/2014) and Jupiter followed just nine minutes later.  I finally determined that there was a cloud bank obscuring the first five or ten degrees of the eastern horizon.  I could see many stars above me and the waning quarter moon above me.  Normally, KCI (which is five to ten miles away from me to the northeast) and downtown Kansas City (to my southeast) light up any and all clouds when the sun isn’t shining brightly.  Not being able to see the clouds along the eastern horizon was just plain odd.  After nearly 45 minutes of waiting, I finally spotted a bright dot low in the eastern sky.  Using my smartphone’s camera, I took this photo, where you can see Venus but not Jupiter (due to limitations of the smartphone’s camera lens, etc.): 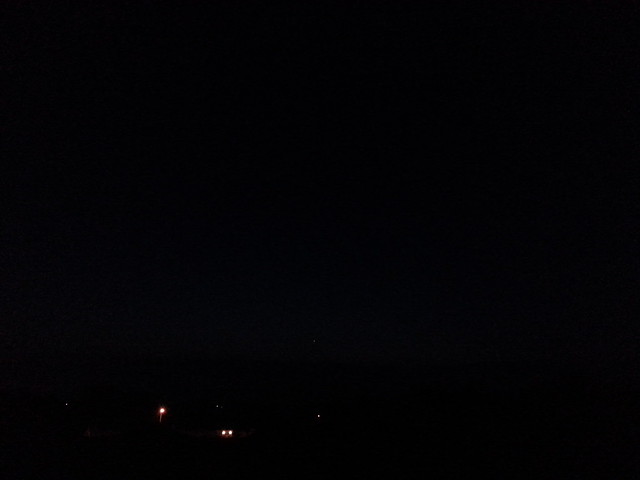 Sunday morning I slept in and almost missed Venus approaching Jupiter, but I did catch some pretty pink clouds just before sunrise. Venus rose at 5:02 and Jupiter at 5:06 a.m. Sunday morning, but I didn’t take this picture until after six o’clock: 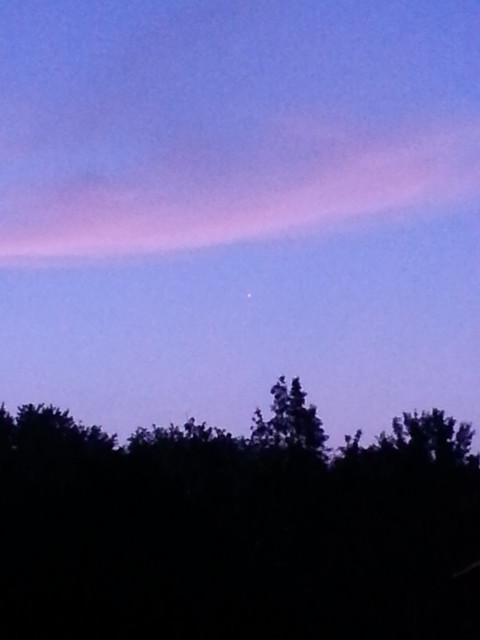 Sunday evening, I  emailed my dad and uncle a link to the EarthySky entitled “Closest conjunction of two planets in 2014 before sunrise August 18.”  I then called my dad as I knew he would not read his mail again until later Monday morning (usually near seven o’clock in the morning).  He’s a ‘read email only once a day’ sort of retired person now.  I told him about the last two mornings I’d observed Venus closing in on Jupiter and told him I planned to get up even earlier than normal on Monday morning, because both planets were rising at 5:04 a.m.  He said he’d set an alarm and meet me at City Hall in the morning.

I went to bed at my normal time and set my earlier alarm for 4:45 a.m.  I woke up at 4:09 a.m. (go figure).  I got ready for work and made my lunch.  I packed the van and left the house about five minutes after five.  My dad was already setup at City Hall, taking photos of the moon while we waited for the clouds to clear or Venus and Jupiter to rise enough to clear the clouds. 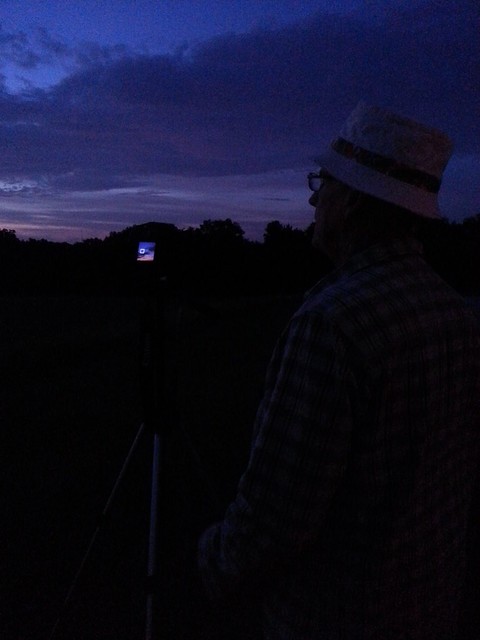 My dad and his camera and tripod just after six o’clock Monday morning.

He later e-mailed three photos from the many he took this morning and I include them here, as they are much better quality than my poor smartphone camera: 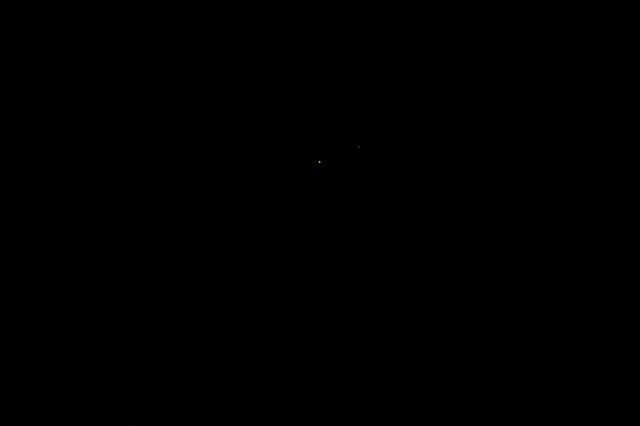 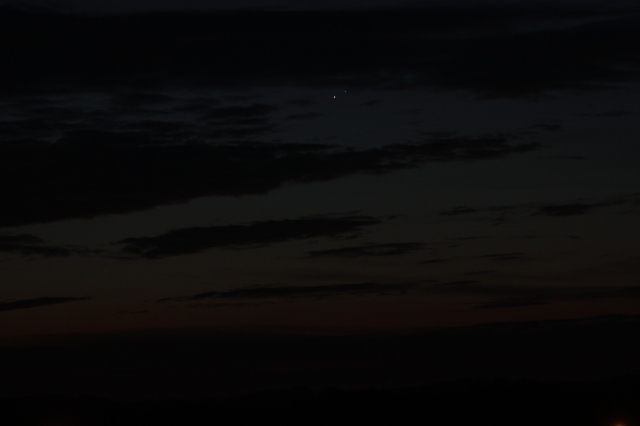 Venus and Jupiter through the clouds (photo credit: Dan Andrea) 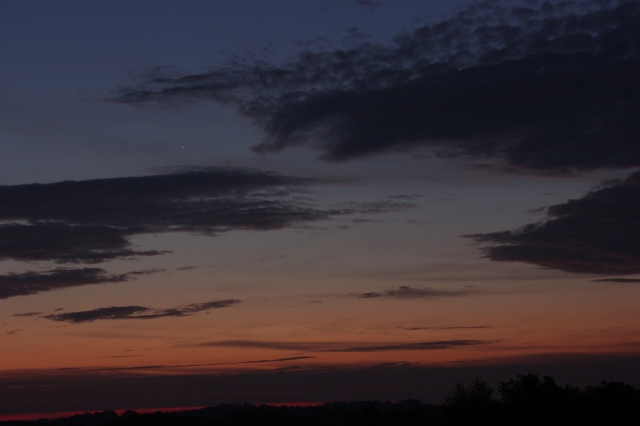 Not so closeup of Venus and Jupiter through clouds and brightening skies (photo credit: Dan Andrea)

And just for completeness’s sake, I include the best of the photos I attempted to take with my smartphone camera: 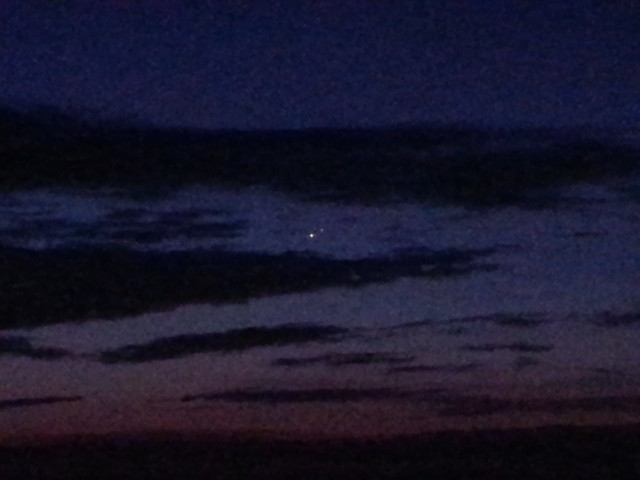 It was a gorgeous morning and despite the clouds, dad and I had a great time observing this ‘closest conjunction’ of the year. I hope you got a chance to see it this morning as well.

The next best photo opportunities for budding amateur astrophotographers will occur later this week (on Friday and Saturday mornings):

Don’t stop watching after August 18! The moon is in the predawn sky now, too, and will be sweeping past the planets this week. Here is the view Friday morning, August 22.

Here is the view Saturday morning, August 23. Venus, Jupiter and the waning moon will be a spectacular sight on this morning, low in the east before sunup.