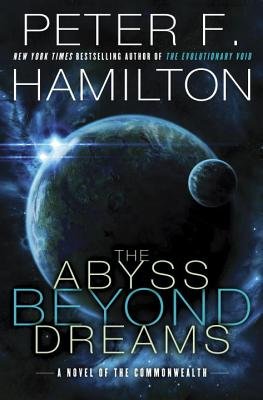 The Abyss Beyond Dreams
A Novel of the Commonwealth

The wait is over. Bestselling science fiction master Peter F. Hamilton is back with the first of a new two-book saga set in his popular Commonwealth universe. Distinguished by deft plotting, a teeming cast of characters, dazzling scientific speculation, and imagination that brings the truly alien to life, The Abyss Beyond Dreams reveals Hamilton as a storyteller of astonishing ingenuity and power.

The year is 3326. Nigel Sheldon, one of the founders of the Commonwealth, receives a visit from the Raiel—self-appointed guardians of the Void, the enigmatic construct at the core of the galaxy that threatens the existence of all that lives. The Raiel convince Nigel to participate in a desperate scheme to infiltrate the Void.

Once inside, Nigel discovers that humans are not the only life-forms to have been sucked into the Void, where the laws of physics are subtly different and mental powers indistinguishable from magic are commonplace. The humans trapped there are afflicted by an alien species of biological mimics—the Fallers—that are intelligent but merciless killers.

Yet these same aliens may hold the key to destroying the threat of the Void forever—if Nigel can uncover their secrets. As the Fallers’ relentless attacks continue, and the fragile human society splinters into civil war, Nigel must uncover the secrets of the Fallers—before he is killed by the very people he has come to save.

After spending a month or two reading World War I fiction and non-fiction as well as a somewhat depressing post-apocalyptic dystopian novel, I needed something lighter and a bit more uplifting.  I switched to space opera.  I lucked into several ebooks available as pre-release eARCs via Netgalley, this being the third one I’ve read of the four I found (see my two previous reviews on The Chaplain’s War and A Call to Duty).

I enjoyed Hamilton’s writing style, but I must admit to being a bit confused or at least uninformed about his existing Commonwealth and Void universes.  This was my first Hamilton novel so I dived right in and either sank or swam by his efforts.  To his credit, even with limited world-building or recap exposition in the Prologue, I gleaned enough to make the read enjoyable.

Most of the spaces between the Prologue and the Epilogue, with the exception of Book Five, described a three thousand year-old civilization on the downward slope of corruption and decadence and the beginnings and boilings of an inevitable revolution.  Technology stayed stuck in the steam age thanks to the vagaries of Void enforced physics but with the added benefit of psy powers (mostly telepathy and telekinesis).  One other power or ability is key to the entire novel, so I will avoid relating it to spare spoiling the effect for you.

But once you got through Book Five you learn that all is not what it seems with the revolution, even unto the highest echelon and the innermost circles of the conspiracy.  And here is where I sympathized with Kysandra’s misgivings.  Ends justifying the means?  Only book two of the Chronicles of the Fallers will tell.

My thanks to Netgalley for allowing me to read and review this pre-release eARC of The Abyss Beyond Dreams, available Tuesday in the States from your favorite book retailers.