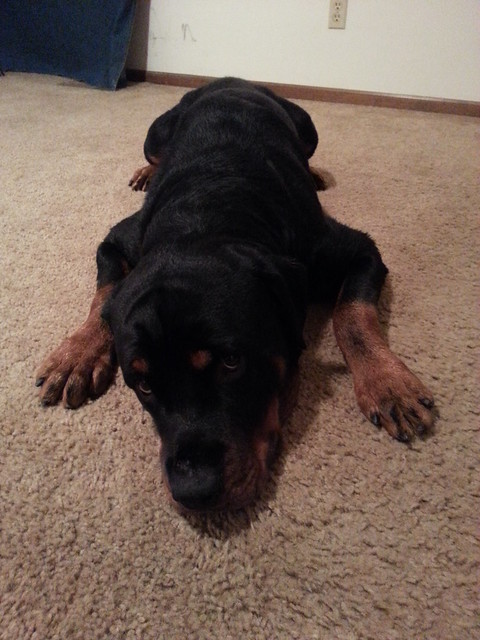 Porthos playing after his first bath.

This past weekend wasn’t quite as rough as the previous one.  Porthos has fully recovered from his upper respiratory infection and is now eating like the Rottweiler I knew he was (i.e., if there’s a bowl of dog food handy, he will snarf it or inhale it, whichever is faster).  Terry is still recovering from his viral mishap, so we didn’t do much besides sleep and watch television.

I did manage to get Porthos and Lexy out for walks on Sunday afternoon.  Saturday was too miserable (cold and damp and sometimes drizzly) to walk or even let them in the backyard.  Sunday was still overcast but at least not wet.

I walked Lexy first so she wouldn’t feel slighted.  She did her usual amble around the neighborhood.  She really doesn’t like walking back among the houses, where I feel ‘safer’ or less worried about traffic.  Lexy likes to walk along the main thoroughfare into our neighborhood, which involves a slight uphill climb to where the Community Library and City Hall are (about a block away).  When we turned around and headed back north, I regretted not grabbing my ears muffs.  My ears were stinging by the time we got back to the house.

I had Terry put the pinch collar on Porthos.  The first time I walk a new dog, especially one as big and potentially rambunctious as Porthos, I want to have a firm grip on the leash and a tool to get him to stop in an emergency.  I couldn’t locate all the missing links to the pinch collar so it was a bit snug when we put it around his neck.  Later, the next day, while I was frantically looking for my Bluetooth headset that I’d put in a ‘new’ place — hanging off the corner of my daughter’s oil painting of Roxy — I found another missing link on the kitchen table.

I put my ear muff on my head (it’s a headband kind of thing) and took Porthos out the front door.  I walked him around the side yard to let him sniff out all the good spots the other neighbor dogs mark.  I retraced the route Lexy and I took a few minutes before, back up the hill towards City Hall.  I made sure to stop at all intersections (even driveways) and make Porthos sit for a few seconds.  I was very pleased with his behavior on the leash.  Never once did he pull me or even stop to sniff.  He walked with his head or shoulders at my left hip and stopped when I stopped and started when I started.

I took him past City Hall into a field, sometimes used for soccer in the spring, and let him wander around a bit, still on the leash, but I let him lead.  We eventually wandered around to the embankment that overlooks K-7/US-73 (aka Main Street) as it exits south towards Bonner Springs and I-70.  I led him along the top of the embankment and back to the sidewalk along Lansing Lane (the short one-block long street that connects Main Street to First Street Terrace.  We ambled back home and my ears were thankful for the snug warmness under the muff.

Later that afternoon, I gave Porthos his second bath with a different type of shampoo, one designed to sooth flaky itchy skin using oatmeal and milk and other ingredients.  The directions stated I should shampoo for 5-10 minutes.  My back was not happy with that but I scrubbed as long as I could.  Porthos stood silent and stoic through all of it.  I released him from the shower and he ran around for a bit, but not nearly as much as he did for his first bath the week before.  He even let me towel him dry several times without making me chase him around the bedroom.

I had hoped to also give Lexy a bath on Sunday, but my back had just had too much fun this weekend.  I forgot to mention that I spent Saturday morning at work, not to work, but as a caroler for the Breakfast with Santa event my firm hosts every year for the children of any employee.  I volunteered for an inaugural caroling group consisting of staff and attorneys from our Kansas City office.  We performed four sets throughout the morning.  Our  next performance will be at the holiday happy hour in a couple of weeks.

Lexy eventually got her bath, but not until late Monday morning.  I had decided to sweep and vacuum before giving her the bath, but in hindsight that probably wasn’t the smartest thing I did all weekend.  Unlike Porthos, whose coat is very short and does not appear to shed much if anything during or after his bath, Lexy is actively shedding her undercoat.  I let her out of the shower but remained in the shower myself to wash my own hair and when I exited I found tufts of black hair everywhere – the bedroom, the hallway, the stairs, the great room.  Hmmm … guess I’ll be vacuuming again.

So far, Porthos has integrated well into our family.  Lexy has bonded with him and Porthos is not so traumatized when I leave for work.  We only have a couple of things to work on to train him.  First, keep him out of the trash can(s).  Second, stop him from scratching at the back door and whining when we don’t let him in immediately.  The training aid for both issues is a water squirt bottle.  Works fairly well.

Sorry no new photos this round.  I didn’t want to risk taking photos while walking him the first time.  Next time I walk him, I will take some photos provided it’s not dark and this time of year, it’s almost always dark when I’m home from work.