I should have scheduled this post to publish just after two o’clock this afternoon, which would have been thirty years to the hour marking the birth of Derek Randall Moss.  But, I couldn’t wait that long to welcome my son to his third decade.

As you can surmise, this blog post will be a trip down memory lane for me.  And unfortunately I don’t have many photos of Derek from his first decade.  It was the age of film cameras and I owned a very cheap almost disposable 35 mm camera that I took a few snapshots with.  I later scanned a few of them to create digital copies, but many of them still languish in shoe boxes in the storage room.  Oddly, I have more video footage of both kids on old mini-VHS than I do still photos.  At least until we reach the mid-90s when digital photography really started taking off.

I won’t go into the gory details but some interesting trivia from the night before.  I drank no alcohol the entire time I was pregnant with Derek (although I ate a ton of PBJ sandwiches).  Terry and I went to visit friends on February 8th and for some inexplicable reason I agreed to try for the first (and last) time a White Russian.  A couple of hours later, I was in labor.  Needless to say I’ve not had one since and I rarely eat peanut butter and jelly sandwiches either.  Not surprisingly, Derek loved them growing up (the PBJs that is, not the White Russians).

Those first couple of years were tough for our young family.  Terry’s mom passed away the year before Derek was born and his father’s health started to decline soon after.  We actually moved in with his father for a few months to keep an eye on him and let us get on our feet after Derek. We did manage to purchase a commemorative brick for Derek at the then newly constructed Epic Center in Wichita.

Derek admiring his brick at the Epic Center

By 1988, however, we’d found a home for sale in Benton and moved east of Wichita for the next eight years.

In 1989, Rachelle spoiled Derek’s fun and joined the family. During the summer of 1991, they agreed to a truce for my brother’s wedding.

Despite the fact that Derek took 14 months to walk (er, run, really, I don’t think he slowed down enough to really walk) and only having training wheels on his first bicycle for a couple hours, he kept active, trying out nearly every sport available, but gravitating early to junior wrestling and eventually judo and jujitsu. 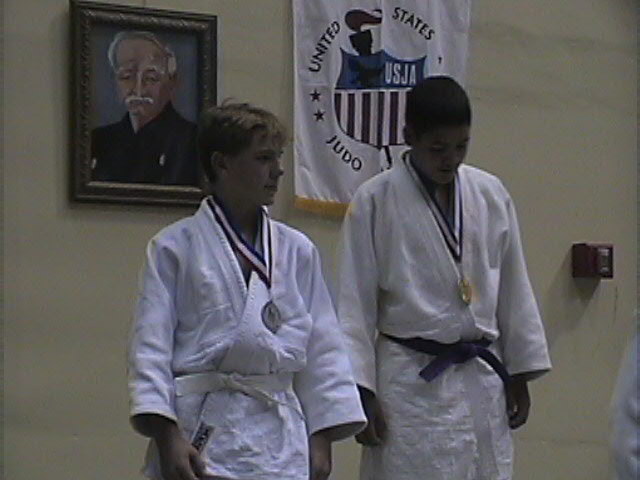 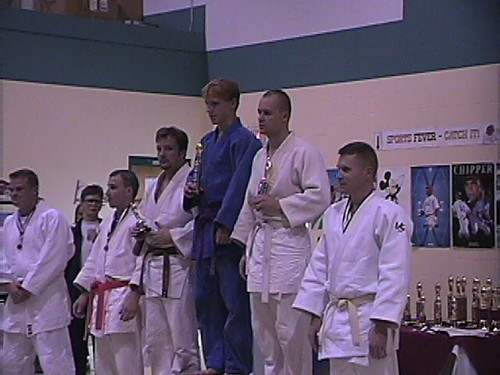 In May 1995, Derek participated as a runner in the Wichita RiverFestival River Run. 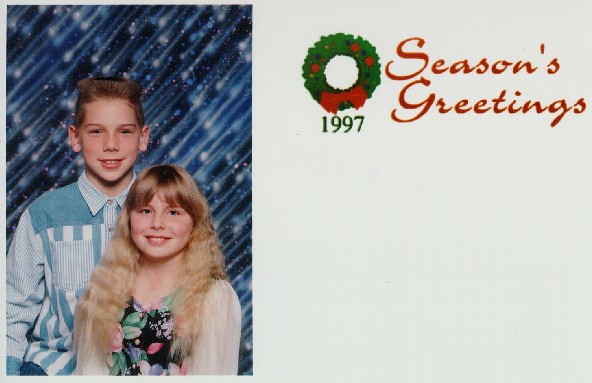 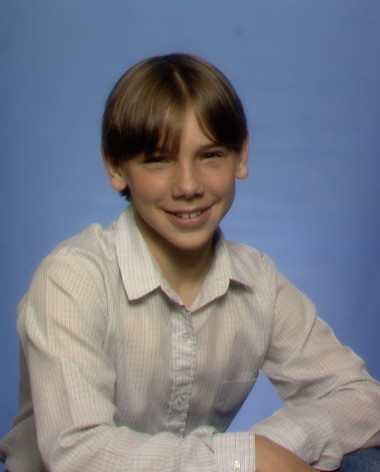 In 1996, I accepted a position at a large law firm in Kansas City, which necessitated us living separately for a little over a year.  I searched and searched for a suitable house to buy, but didn’t find one until early 1999.  We bought our current home just in time for Derek’s 13th birthday. 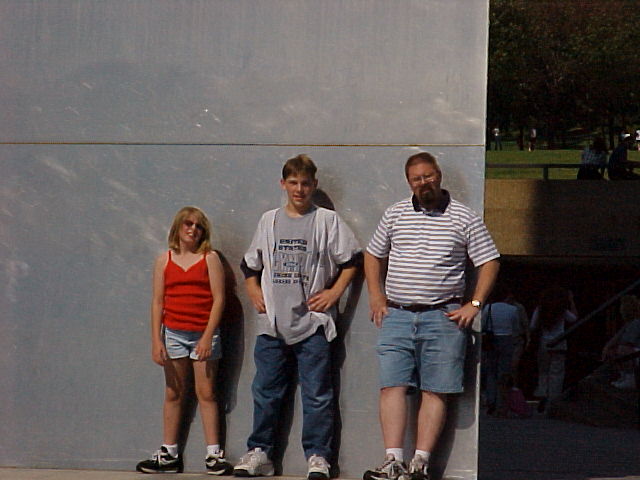 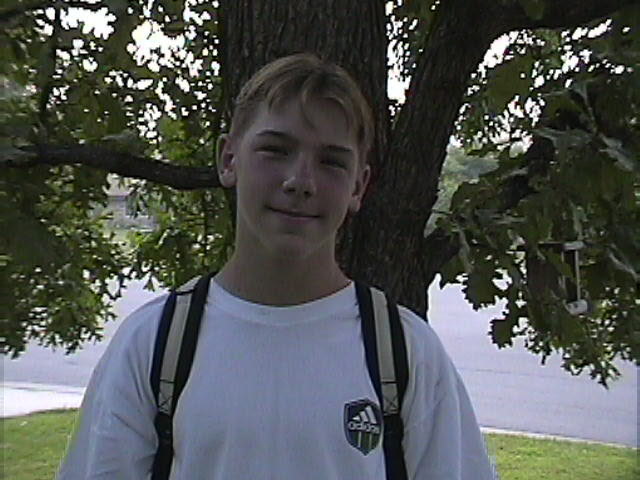 Derek continued to study judo and jujitsu throughout high school and participate in both soccer and wrestling for the high school. We traveled several times to judo camps and judo competitions around the nation, including one where Derek met Jimmy Pedro, World Judo Champion and Olympic medalist. 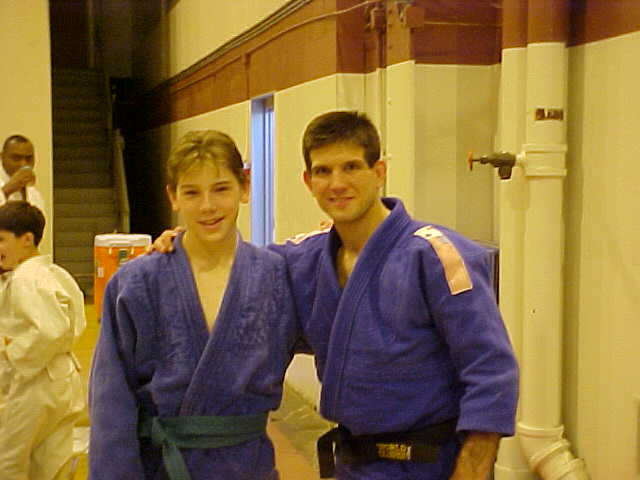 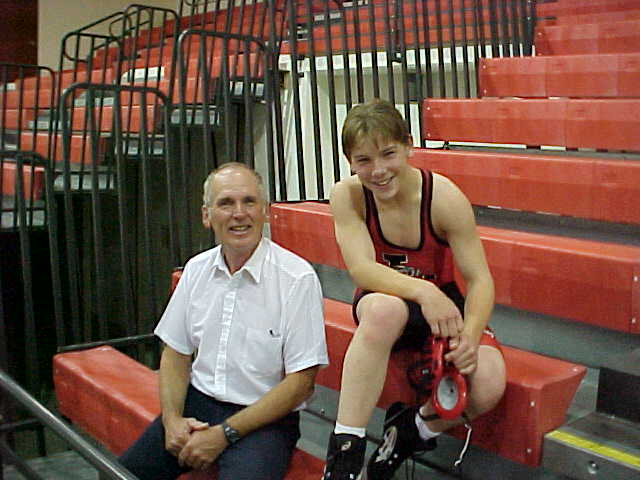 Derek posing with Grandpa Andrea between rounds at a high school wrestling meet.

All this grappling resulted in a very healthy teenage son to make any mother nervous. 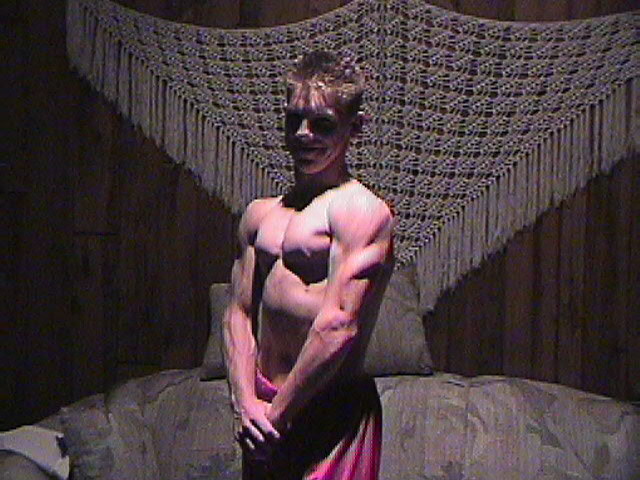 And over that summer he helped his dad’s pursuit of Solo II autocross racing as part of the pit crew. 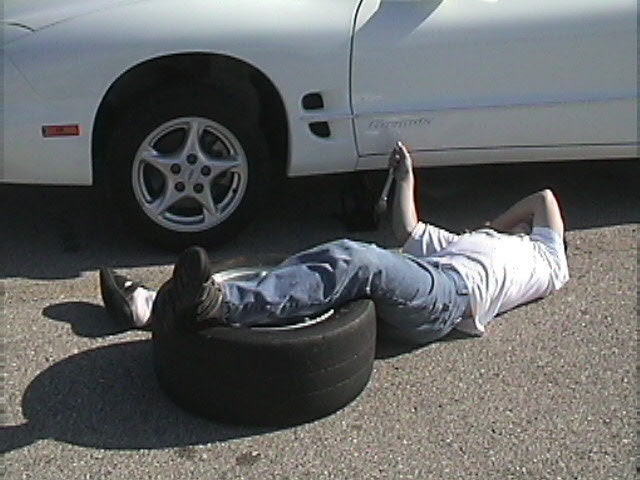 Derek the over worked pit crew of one 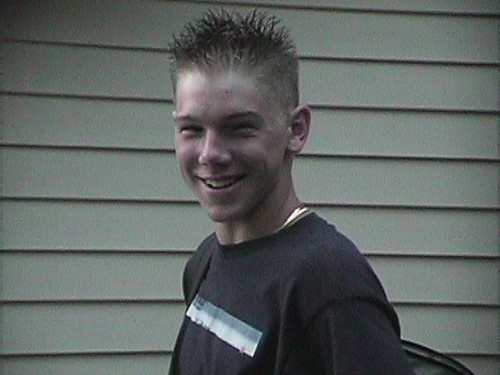 In 2002, Derek celebrated his Sweet Sixteen birthday, posing with his usual impish grin. 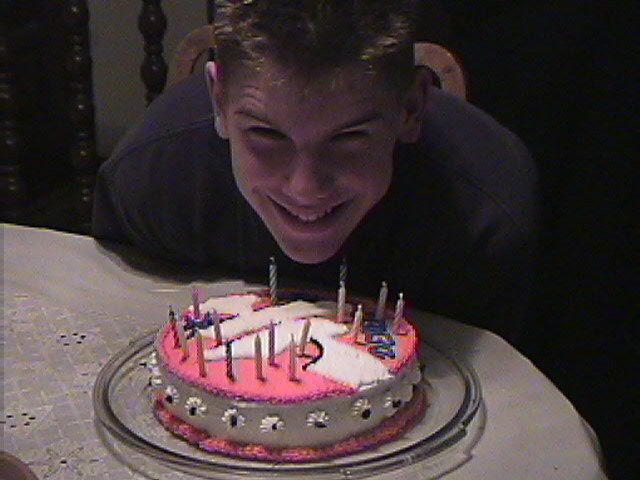 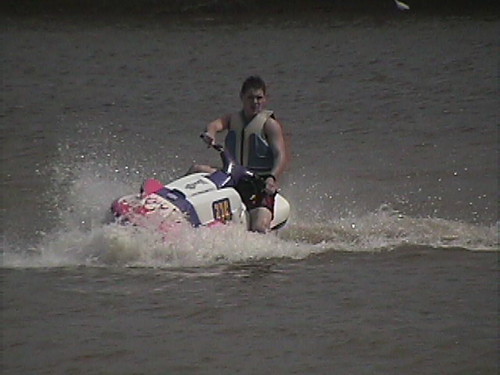 Both Derek and Rachelle participated in vocal performance during high school. 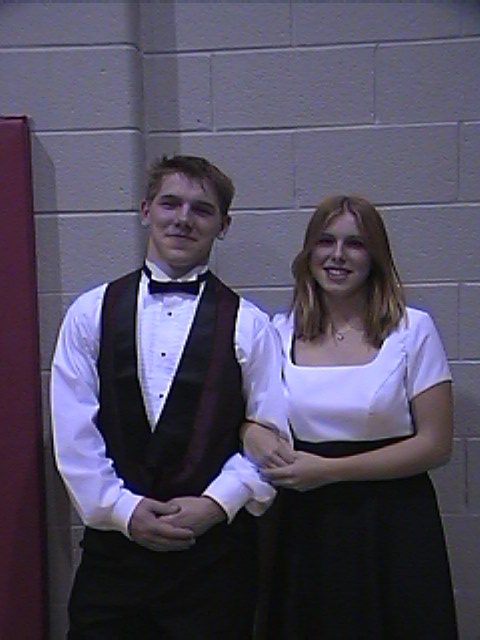 Derek and Rachelle before a vocal concert (October 2003)

In May of 2004, after much gnashing of teeth by both parents, Derek graduated from Lansing High School. 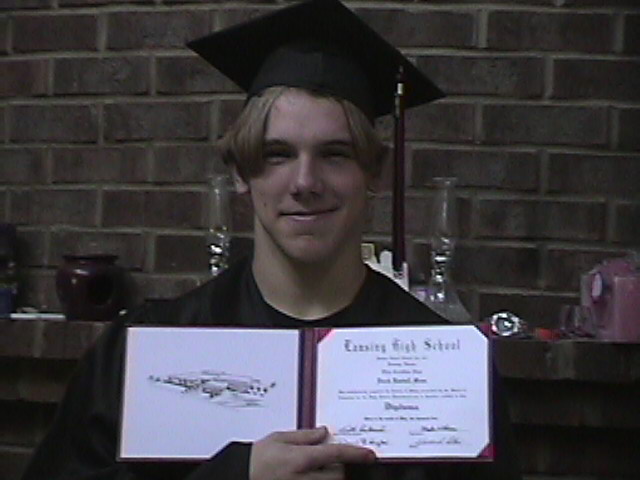 So, what happened after high school?  There was some time spent at a local community college, where Derek met his future wife.  They tied the knot on July 19, 2009.

Less than two weeks after the wedding, Terry and I became empty nesters.  All three of our kids up and moved to Texas.  Derek enrolled with the intensive 18 month program offered by the SMU Guildhall and Rachelle enrolled at UNT to finish her bachelor’s in Musicology.

Derek, Royna and Rachelle all relocated to Texas (Plano and Denton respectively) in August 2009.

Royna took one of my favorite photos of Derek in September 2009 when they visited Six Flags over Texas with friends.

We ventured down to north Texas for Thanksgiving.  I volunteered (am I crazy?) to cook Thanksgiving dinner in Derek and Royna’s apartment.  That was quite possibly the smallest kitchen I have ever cooked in – bar none.  We flew all three of them home for Christmas, though, and it was great to have the house full of people again.

Derek and Royna back home for Christmas 2009

We repeated the ‘tradition’ of a North Texas Thanksgiving the following year, by which time, Rachelle’s boyfriend, Nic, had migrated to the area as well.

The gang’s all here in North Texas for Thanksgiving 2010

And the gathering resulted in one of my all time favorite photos of these four.  I’ll leave you to come up with an appropriate caption.

Derek does what any self-respecting man does after eating a traditional Thanksgiving dinner.

And that photo reminded me of another time when …

Now where was I?  Oh, that’s right.  We returned almost immediately to North Texas, this time with grandpa along for the ride, to celebrate Derek’s graduation from SMU.

Derek had already accepted employment with Halliburton before graduation and stayed with them for a couple of years before moving on to Tyler Technologies, where he remains happily employed for the foreseeable future.  Over the past five years, Derek has amazed me by paying off all of his student loans, buying a new car for his wife (and paying it off in six months) and most recently purchasing a home.  Now, all Terry and I are waiting for are the grandchildren.

Happy 30th Birthday to the Best Son Ever!

I’m going to close with a few more recent family photos.  I hope you’ve enjoyed my trip down memory lane. 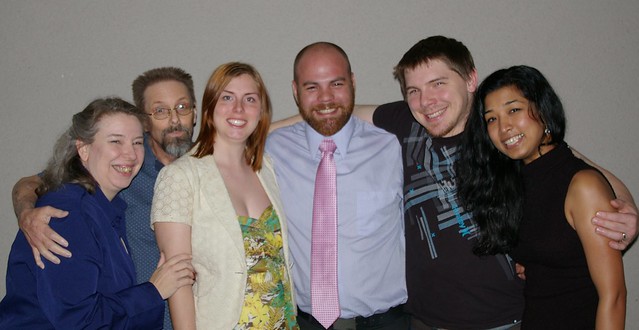 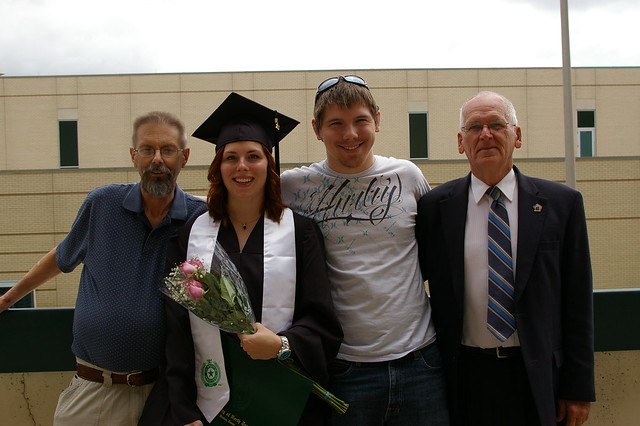 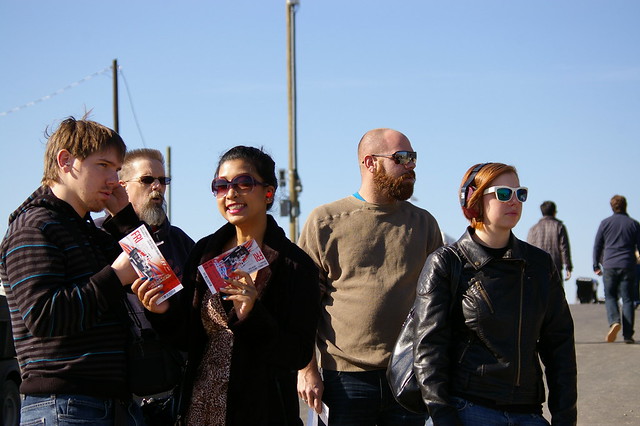 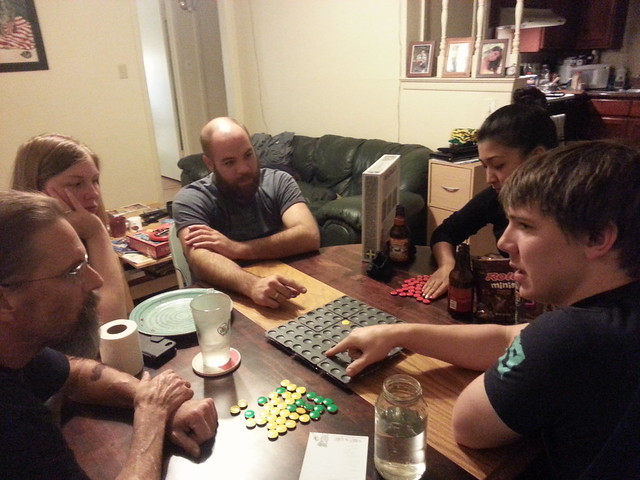 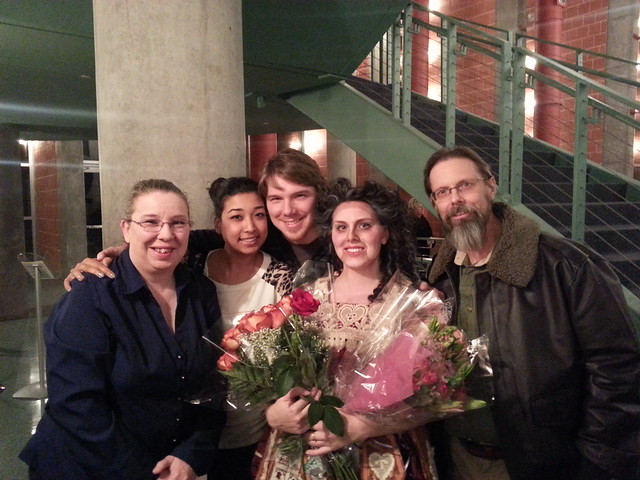 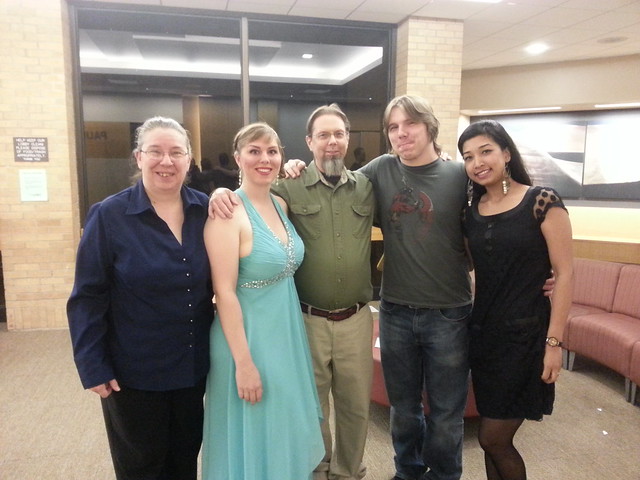 After Rachelle’s Master Recital (May 2014) 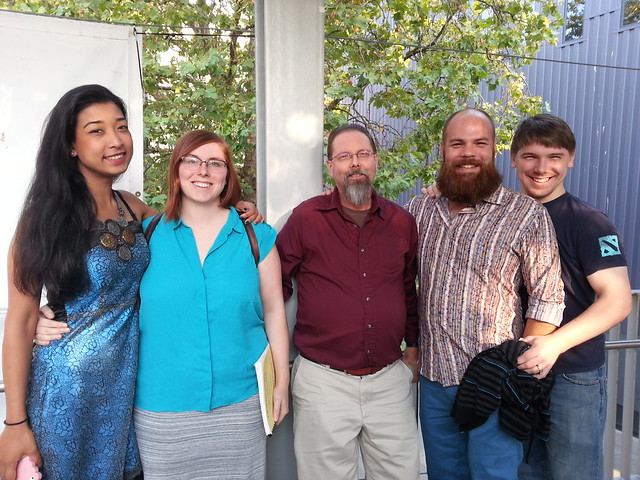 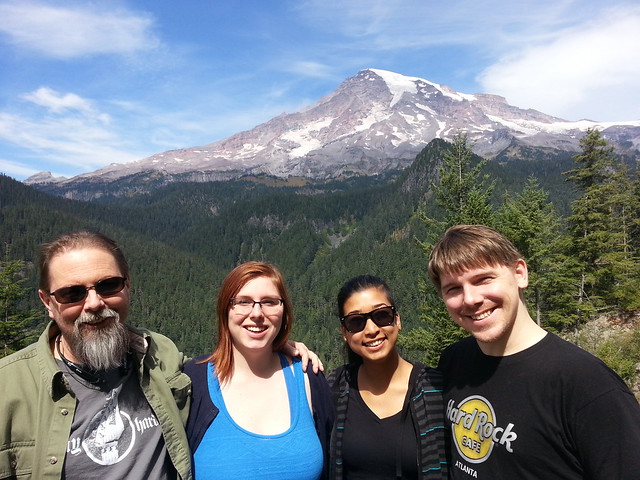 3 Responses to My Son Turns Thirty