Postcards from the Edge of Islandia

The second third of Islandia suffered middle book syndrome even though it’s not actually a middle book.  Yet it is the middle of this book.  The first third had elements of a travelogue, a natural history explorer, a diplomat and unrequited love.  The second half included the climax of the diplomatic crisis but replaced unrequited love with a rebound romance and the consequences of isolationism.  The protagonist’s predicament becomes more interesting and intriguing as he begins the return journey back from the brink of near total Islandiaic immersion or immolation.

Dorna, I had a marvelous visit with Natanna and the Hyths on my way back to The City. Yet I pine for the beauty of Dorn Island.  You have encouraged me to avail myself of all my opportunities.  Warmest regards, John (Ch. 16, The Hyths and The City)

John, I’ve been thinking of your problems and wish him all happiness.  My sister Nettera has wed Bain a man of 35.  We are not happy she has done this but I can’t write about it.  You are always welcome in this lonely place.  Nattana (Ch. 18, The Exhibition Ship)

John, remember the fable of the little gray wolf.  Dorn (Ch. 19, The Visit of Dorn)

“While those they loved fell everywhere,
Although unhoping of relief,
They held the fort with steadfast care
And yielded neither to despair
Nor to the lassitude of greif.”

John, lovely weather here now, so lovely I can’t stand to be indoors.  Dorn visited.  Nettera is pregnant.  Will you come visit us soon?  Nattana (Ch. 20, Fall: The Fains and Hyths) 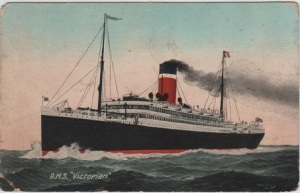 I could have included many more examples of paraphrased correspondence reduced to postcard snippets.  All correspondence in this novel has been handwritten letters.  Islandia has no telegraph, no electricity and no trains.  Travel is ponderous, usually on horseback and often on foot.  Some river and marsh travel of course includes boats, usually rowed or sailing vessels depending on the location.  John Lang, while consul, arranged his schedule around the arrival and departure of mail via steamers.  A few telegrams were sent, but not from within Islandia, rather from other ports near or on the steamer route.

Since I began writing this past, over a week ago, I’ve continued reading Islandia and am nearly finished with Part IV.  John Lang is in the midst of his goodbyes in the chapter appropriately titled ‘Leave-Takings.’  He is about to depart Islandia, returning home to America, where he will spend a year deciding what he wants to do with his life and where he wants to live it.  His actions in and for Islandia have granted him an unprecendented opportunity which he wisely did not spontaneously decide without further contemplation.

My thanks to the Edwardian Postcard Project for the use some of their collection of period postcards from 1907 through 1909, which is roughly analogous to the time period of John Lang’s stay in Islandia through the end of Part IV.