The Fellowship of the Ring

Part One of The Lord of the Rings 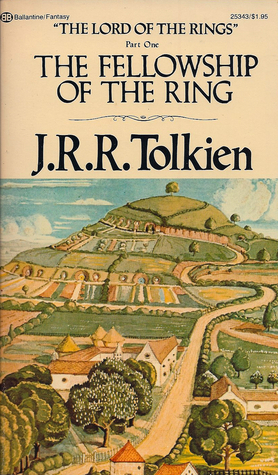 This battered well-read edition of The Fellowship of the Ring still stands on my book shelf, amidst it’s younger, better bound, brother editions. While reading essays contained in Meditations on Middle-Earth, it struck me that nearly all of these authors (many of whom I’ve read and enjoyed their own authorial subcreations), enjoyed a similar life-altering reading experience at about the same point in time as myself.

To confirm my theory (and increasingly dim memory of my life four decades ago), I pulled this paperback off the shelf and became immediately distracted by the notes written to me by my friends on the backside of the covers. No one signed their epigraphs, but I can still decipher the handwriting and put faces to scrawlings. But back to my original quest: The actual publication date of this mass market paperback (also confirmed here at GoodReads): 1976

If I acquired this edition that year, and read it then (which I have no doubt I did), I would have been either 11 or 12 years old (depending on the time of year; my birthday occurs in early October). If I received this edition (and their companions) in the following year (1977) the oldest I would have been reading it would have been 13. But I remember reading Lord Foul’s Bane in paperback (published mid-1978) after reading Tolkien’s masterpiece, so I’m reasonably confident I was either twelve or thirteen when I first visited Middle-Earth.

Prior to 1976, between the ages six and twelve, I read all of Laura Ingalls Wilder‘s books, all the Nancy Drew mysteries my mother had in hardback (published in the 30s and 40s) and adventure books usually meant for boys (Daniel Boone, Tom Sawyer, etc.). Growing up in the country, a mile away from the nearest person your own age translated to lots of reading time (either that or practicing the piano).

I have lost count how many times I’ve read this paperback edition of The Fellowship of the Ring or any other edition I own (and there are several on my shelves and in my ebook library). In fact, I’m reading it yet again right now, albeit as an ebook edition of the entire volume.

I never tire of it. I pray I never do.

3 Responses to Four Decades of Fellowship